Here is some started information and we can go from there:

A Definition of Geomancy

*scratch what i said before :rolleyes:
Reply Tue 28 Nov, 2006 03:05 pm
@Electra phil,
fogs and mists
rains of astral density fall to the ground

terra-formers are we
reclaiming the light within this world
activating dormant patterns to redeem all life and return to the Master Within,
His Kingdom United and as One

I just want to say that it is easy to believe how the ancient 'calendar' societies, with their dependency upon the stars and the planets would develop an advanced Geomancy. I've never put much stock in astrology related concepts but I do think there's something to it. I once had my palm read by a mysterious old lady and it was strange, the lady really seemed to know me.

There is one thing I tend to do and I have always kept this a secret. I have marked out some dates and times where the sun is moving across the sky so that I know, for example, on certain days in June where precisely the shadows will fall (or the penumbra) in my bedroom. I have done this sort of thing before and I don't know exactly why I am erotically attracted to it. I think that I might be Pythagoras restored (or Anaximander).

I guess I don't believe in 'One Great Universal Soul'. I believe rather in a plurality and hierarchy of 'super souls' many of which may live just behind reality like - as in the movie "The Truman Show" or sort of like Moby Dick or the Dream Tigers of Borges, where the objects which populate reality are in truth card-board cut outs, and artificial props behind which dwells a metaphysical complex of outrageous purity.

I would like to go hiking and find worth-while lattitudes and choice longitudes, so that I might return to them at similiar times on other days. There is nothing so promising as a new day. I believe the day is alive, for I have felt the signs of a persona of quiet days when little stirred.

Hylozoism teaches that things such as afternoons can indeed posess life. And I guess this life comes down from the astral position and the movement of the planet relative to the other astral objects and from the sky down to the forests relative to the various movements upon the ground. I have at times glimpsed my abstract reflection in nature - in a soaring Hawk, or a dead Sparrow where I have found my true emotions mysteriously expressed for me.

I have also glimpsed my abstract mood in television commercials and heard it on country radio stations. Of course, it could just be me, but Whitehead says that human ideas in the aggregate moment can take the form of a living organism which may connect with different things on different levels, and I have found society and the forests alike to posess an interior consciousness. It's most subtle and most uncanny, but I have learned that abstract 'ideas', like tropical fish, are living things.

And I have come to believe that the days, these cosmological positions, these physical objects, were somehow once people or are in substance the reincarnation of many crowds of people who inform the soul of time.

Anyway, tell me what you like about Geomancy. For instance, is it important to walk the same paths on your way to a sacred space, do you leave your soul behind your tranquil walks? Do you have any secrets that you could tell?


--
Musick has Charms to sooth a savage Breast,
To soften Rocks, or bend a knotted Oak.

I've read, that things inanimate have mov'd,
And, as with living Souls, have been inform'd,
By Magick Numbers and persuasive Sound.
What then am I? Am I more senseless grown
Than Trees, or Flint?

Your writings arouse something in me...could be love or desire. Usually it means, another learning curve. I always follow my intuition because it is never wrong.

The biggest secret is I am very lonely, and there is a world of love and pains that need healing in my immediate circle.

The stones can remind me to be in the center which is everywhere. To be content within 10 feet. I have much desire and it is usually for things which are far away. These are lessens I never permanently learn, but am reminded about over and over again.

If you can be really still and very quiet in the center (of these spaces - yourself), then you can travel.

Shapes are sounds and mean vibrations. Vibrations are used to pray into the dream.

Rocks are diligent dreamers. My rock circles are for a good bit of alchemy or minor transmutations.

I would suppose then we realize we can dream anything we want to dream. Sounds like a very mundane idea, but the practice of it is actually quite difficult.

One day my letters to you will be so grammatically sound and eternally interesting, they will be archived at some center for higher truth--

XX
Reply Wed 29 Nov, 2006 07:20 am
@Electra phil,
The vesica piscis is a symbol made from two circles of the same radius, intersecting in such a way that the center of each circle lies on the circumference of the other. The name literally means the bladder of the fish in Latin. In the Christian tradition, it is a reference to Christ, as in ichthys. It is called a mandorla ("almond") in India and known in the early Mesopotamia African and Asian civilizations.

The symbol is formed from the almond-shaped area in the overlap between the circles, as shown in black in the diagram - for certain purposes also including the upper arcs as far as the edges of a rectangle whose sides coincide with the widest points of the almond (as shown in light blue in the diagram). The resulting figure looks like a stylized fish, or in the extended version like a flattened Greek letter alpha. 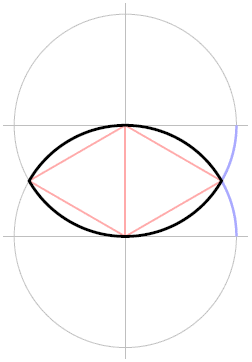 Construction diagram of the Vesica Piscis, showing the extension to form the Ichthys


It has been the subject of mystical speculation at several periods of history, perhaps first among the Pythagoreans, who considered it a holy figure. The mathematical ratio of its width (measured to the endpoints of the "body", not including the "tail") to its height was reportedly believed by them to be 265:153. This ratio, equal to 1.73203, was thought of as a holy number, called the measure of the fish. The geometric ratio of these dimensions is actually the square root of 3, or 1.73205... (since if you draw straight lines connecting the centers of the two circles with each other, and with the two points where the circles intersect, then you get two equilateral triangles joined along an edge, as shown in light red in the diagram). The ratio 265:153 is an approximation to the square root of 3, with the property that no better approximation can be obtained with smaller whole numbers. The number 153 appears in the Gospel of John (21:11) as the exact number of fish Jesus caused to be caught in a miraculous catch of fish, which is thought by some to be a coded reference to Pythagorean beliefs. Ichthys a symbol used by early Christians, more popularly known as the fish symbol is created by the almond shape and the light blue extension as seen in the Construction Diagram of the Vesica Pisces above. 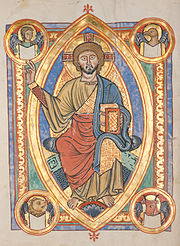 Uses of the shape

Other uses of the shape include that by some early peoples of the almond-shaped central area as a representation of the female genitals, and the use of a similar (horizontally-oriented) fish symbol called the Ichthys by early Christians. In Christian art, some aureolas are in the shape of a vertically oriented vesica piscis, and the seals of ecclesiastical organizations can be enclosed within a vertically oriented vesica piscis (instead of the more usual circular enclosure). The most common modern object based on the vesica piscis is the American football, which resembles the interior almond-shaped area of the vesica piscis swept about its long "axis" to produce a 3D object with rotational symmetry.

The Eye of God


We also have referred to this space as The Womb of the Goddess, reflecting on the sacred geometry associated with Avalon.

So calling this space the womb or eye are both perfectly suitable because both are tools in which to experience a kind of communion.

This is a picture of Coral Castle. Constructed by one of humanities last (publicly seen) Master Geomancers. Edward Leedskalnin was the name of it's builder. Much of my research is in comprehending this individual's efforts. What he knew I don't claim to know (his spiritual knowledge). I do however understand, and comprehend how he accomplished his engineering and electrical "wonders".
Reply Wed 6 Dec, 2006 04:54 am
@RemberingIAM,
Thanks for sharing that information on Coral Castle...

Here is a link with a simple explanation of Sacred Geometry that is a bit "new agey" but evenso, I feel is accurate: 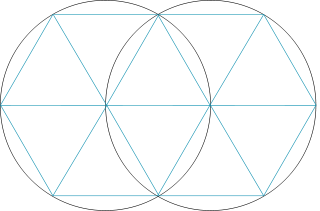