This forum will be assimilated. Resistance is futile.

Reply Sun 9 Jan, 2011 07:48 pm
This forum will be assimilated. Resistance is futile.
Some time soon, this forum will be assimilated into an a2k group. As some may recall, this forum was originally a private forum on able2know.org until it was moved here in March 2005. In 2008, able2know converted its forums from phpbb to its own custom software (developed by Nick and Robert and a secret elite team of hamsters working 48 hours per day). In 2010, a2k launched a beta version of a2k groups. The first a2k group created was the Philosophy Forum which had existed for years as a vBulletin forum until its founder arranged for a2k to take responsibility for it.

While it may take some getting used to, moving this forum to an a2k group will provide a permanent and professionally managed home for the xFamily.org forums in an online community with over 200,000 people. Many things will stay the same. For example, most old URLs should still work and, as far as I know, the xFamily a2k group will not have any advertising. a2k is also considering resurrecting movingon.org and importing its database. Even if that doesn't happen, the xFamily a2k group will be a place where those born and/or raised in Children of God/The Family can discuss whatever they want to. I am aware that there are now private Facebook groups where some of this discussion is taking place but, for a number of reasons (including privacy concerns) that is not something everyone can use.

For most users, the transition will be seamless. In some cases (primarily for users with a username or email address that already exists on a2k), your username may be modified so that it is unique. In most cases, we will be able to help by merging accounts or changing usernames if requested. More details will be announced as the target assimilation date approaches.
Reply Tue 8 Feb, 2011 06:08 am
Re: This forum will be assimilated. Resistance is futile.
Around when will this change take place?Are there any adjustments needed considering the 200,000 plus persons able to access this? thanks
Reply Fri 11 Feb, 2011 01:12 pm
Re: This forum will be assimilated. Resistance is futile.

Around when will this change take place?Are there any adjustments needed considering the 200,000 plus persons able to access this? thanks

I don't yet know when the move will occur but it will be announced here as soon as it is known. I'm not sure what you mean by "adjustments" but this is a public forum accessible to anyone so the number of people able to access it will not really change (except that it will be on a larger system capable of handling more concurrent users).
Reply Thu 17 Feb, 2011 05:48 pm
Hamsterdam feast on the eternally reanimated and tormented corpse of deceased child molester David Berg) be declared an official paid holiday. Naturally, this could not be tolerated and the hamster revolt was swiftly crushed by our elite counterinsurgency team. 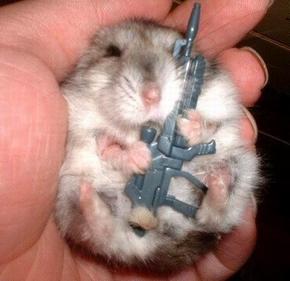