Reply Mon 17 May, 2010 05:23 pm
In YOUR opinion which ten philosophers are the greatest philosophers to have ever lived? Remember this is based on your opinion so there no wrong answer.

These are the ones I consider to have the greatest impact on Western Civilization. 1-3 Seems debatable. Here are my favorite philosophers.

1. brad warner (if you consider zen buddhism a philosophy and not a religion. either way, his first two books hardcore zen and sit down and shut up changed how i acted toward life. i met him when i lived in japan and he was the real thing.)
2. epictetus
3. nietzsche
4. ayn rand
5. marcus aurelius
6. socrates
7. kierkegaard

not sure how much some of them impacted the world, but to me, they put out the best ideas to live by.
Reply Thu 27 May, 2010 04:48 pm
@michael88,
These are my favorites, and not my guess as to historical importance. In no particular order.

Kojeve/Hegel
Wittgenstein
Rorty
Nietzsche
Nicholas of Cusa
Parmenides/Zeno
Spengler
De Casseres --> the book of his I have is philosophy. (Mencken/Shaw)
Diogenes
Epictetus/Marcus Aurelius

I had to double some, as they are so strongly associated in my mind.

Well, I started making the list as the most important philosophers, and I decided to change it to my favorite. Thus, Kant ended up much lower, and Emerson and Ortega ended up much higher. And I hate reading Kant, and I am not much of a fan of much of his philosophy. I just added him to the list as a sign of respect. I also would add Epictetus, because the little that survived history is stellar, but it is such a small body of work that I tacked him on at the end.
Reply Sun 13 Jun, 2010 06:13 am
@michael88,
1. Soren Kierkegaard
2. John Stuart Mill
3. Plato
4. Aristotle
5. Socrates
6. Thomas Hobbes
7. Immanuel Kant
8. Albert Camus
9. Ludwig Wittgenstein
10. John Rawls
Reply Sun 13 Jun, 2010 06:19 am
@Victor Eremita,
How could I forget John Stuart Mill?! I guess that boots Kant off the list since I can't stand reading his overly dry style.
Reply Sun 13 Jun, 2010 06:22 am
@Theaetetus,
Kant is very dry, but I liked the Prolegomena and Religion within the Limits of Reason Alone.
Now JS Mill was a good writer and made me think hard about society, as Hobbes and Rawls did too.
Reply Sun 13 Jun, 2010 06:31 am
@Victor Eremita,
I totally agree with JS Mill being an excellent writer. Mill also had an advantage that many other philosophers did not--his brilliant friend and future wife Harriet Taylor. I think it gave him a different perspective that what was generally held by the men of the day, and it also helped him reinforce his ideas.
Reply Sun 13 Jun, 2010 06:40 am
@Theaetetus,
That's right, Mill was one of the few classical philosophers to marry, eh?

Plato, Augustine, Anselm, Aquinas, Scotus, Ockham, Descartes, Spinoza, Locke, Hume, Kant, and Wittgenstein were all bachelors. And Kierkegaard almost got married, but we all know that story... aw snap!
Reply Sun 13 Jun, 2010 06:57 am
@Victor Eremita,
Mill and Taylor had a kind of odd relationship. Taylor was married, so her and Mill remained close friends, and generally believed to be chaste, until her husband passed away 21 years later. I cannot think of another philosopher that ended up marrying other than Emerson, who was a contemporary of Mill, before the 20th Century. (Just found one---Hegel!)

You also cannot forget Nietzsche, Ortega, Sartre (although he was close with de Beauvoir), Aristotle, Berkeley, and others that are slipping my mind.
Reply Sun 13 Jun, 2010 07:06 am
@Theaetetus,
Aristotle was married to Pythias; Marx married Jenny Westphalen
Reply Sun 13 Jun, 2010 09:42 am
My philosophers (among only what I know and read):
3. Hegel. (There many things one can say about Hegel's genius; but let me only put that he is the founder of the master vs. slave dialectic.)

2. Marx. (Again among many things, I think that his master and slave dialectic transcends that of Hegel with reference to Althusser's reading of Marx through the concept of overdetermination.)

1. Nietzsche. (Some said he's a nihilist, for me he is the realist who revealed the lies that we tell ourselves. He is now my first philosopher, only because his slave vs. master dialectic depends on an incredibly realist conception of life; thus it threatens the very foundations of Marx’s dialectics’ teleological end. I would like to discuss this point, in another topic with you.)

+Benjamin: (simply because of his conception of history: Angelus Novus.)

I think that this is a good topic and as you probably pay attention to, all of our philosophers are those who were acknowledged (by the Western world) as the legacy of Western philosophy. Now, either "the East" did not do any good philosophy in time (if one thinks so, his conception of philosophy is itself problematic) or all of us are the prisoners closed down in the mental cage of Western capitalist superiority along with its philosophical legacy, including its heretics. This is most dramatic for those, including me, who do not know the philosophy of their own lands and who indeed started to abnegate it (thus themselves) by importing the orientalist perspective of the West on its outlook on themselves. The incredible point is “Easterners” not only adopted the perspective of West, but also took it to the extreme. From now on, Ibn-i Arabi or Ibn-I Haldun was mere religious fundamentalists for them; while in Berkeley, they have already been studied as “Islamic philosophers”.

not familiar with his solo work, but i was a big fan of his partnership with Calvin 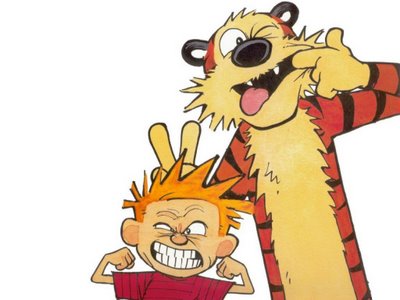 Reply Sun 13 Jun, 2010 04:32 pm
@The Ant,
I am actually a bit familiar with some of the eastern philosophers. I was going to throw Confucius on my list, but he is not so much a favorite or mine--and that goes for the rest of the eastern philosophers with whom I am familiar. Now on the other hand, I find eastern thinkers to be much better in the realm religious and spiritual thinking. I generally consult the East for my spiritual texts, and the West for my philosophical texts.
Reply Sun 13 Jun, 2010 04:50 pm
I'm basing this off of "Those I most enjoy".


I chose my number 10 more on whim, as I'm still picking through him and trying to understand him. It's just fun to try and understand him.
Reply Sun 13 Jun, 2010 07:22 pm
While taking a break from reading Ortega, I decided to revisit this list, and make a new one, not that it really matters. My last one was way too influence by the academic in me. I didn't enjoy most of the philosophers I studied during my undergrad.

1. Socrates/Plato -- even though it is obvious that Plato often disagreed with Socrates and used him as a voice box for ideas that he wouldn't hold himself, you cannot really just look at Socrates without Plato.

2. Ralph Waldo Emerson - What can I say? I just love transcendentalism. I also especially like Emerson's views on individuality, thinking, and aesthetics.

3. Jose Ortega y Gasset - His doctrine of perspectivism remains one of the best versions of that thinking. But he was not just limited to that. He had unique ideas on metaphysics, epistemology, social philosophy, and also threw in a bunch of sociology and anthropology as well. Everyone should read The Revolt of the Masses if they get a chance. It is an often overlooked classic. For Ortega's ghost, it may have been most unfortunate that there were/are? very few Spanish philosophers. Other than Miguel de Unamuno, often cited as one of the founders of existentialism--and a key influence on Ortega--it is difficult to think of another major Spanish philosopher.

4. John Stuart Mill - On Liberty and The Subjection of Women are two of my favorite philosophy books. My views on democracy and rights of majorities and minorities were pretty much lifted straight from Mill. Reading Mill always gets me thinking about how society could be better.

5. Nietzsche - He is difficult for me to place. I wrote my senior capstone project on the eternal recurrence (bad choice) and I agree much of N's philosophy and psychology--even if he was incapable of forming "real" arguments. I also appreciated the style in which N appeared to write (unfortunately, I cannot read German). But in the thousands of pages I have read by and about Nietzsche, I would say that one third to half was mostly trash. Unnecessary filler that would have been better for having more editing and drafting. Oh well, the mess remains for everyone to uncover.

6. Hume - Pretty much all my views on human understanding are directly derived from Hume. Most of my ideas on observations, beliefs, inference, and on the limits to the God we can picture rationally are put forth in
An Enquiry Concerning Human Understanding. I am not a big fan of Hume's ethics and morality though. But his version of empiricism

8. David Harvey - Geographer, Political Philosopher and Anthropologist, Harvey is most widely known for his Marxist urban theory that he exposes in his geographic and political work. His explanation of dialectics is excellent, and his blend of a vast array of fields allows him to ground his ideas firmly in reality.

9. Noam Chomsky - Of course, he may be the most polarizing character in the modern world. But his work in political philosophy was always needed as a major critique to modern society. Chomsky is much like David Harvey in his criticism of the modern urban world, but Chomsky focuses in on much more of the day to day realities rather than the foundations on which society has been built. Chomsky is not afraid to say what needs to be said, and often has much evidence he brings to pound home his points.

10. Epictetus - For the little 25 pages or so that survived in The Enchiridion, one of Epictetus' students relays the perfect philosophy to live by in a world in which everyone's business is everyone else's business. Sure, the philosophy is rather cold, but sometimes the best way to get through live is not concerning yourself with others that should be of no concern to you.

Anyway, sorry Kierkegaard and Kant. I did not like you enough.

And, Thomas Nagel almost made my list just for "What Is It Like to Be a Bat?" It looks like you can read that here.
http://www.scribd.com/doc/2452136/What-is-it-Like-to-Be-a-BatNagel

I generally consult the East for my spiritual texts, and the West for my philosophical texts.


My point is exactly that under that religious and spiritual texts, there is philosophy, however in a different form and content. (because of this different appearance we think that it is more religious, than philosophical.) For ages, only the language of the "Eastern philosophy" had been religion. (Think about Augustine for a similar example.) The Islamic philosophical texts were translated by the Ancient Greek philosophers as the main texts of philosophy. But today, most of us denominate them as mere religious texts.
Reply Tue 15 Jun, 2010 02:28 pm
@The Ant,
I realize that Eastern spiritual texts has philosophy underlying it, but when I am in the mood to read a philosophy book, I am not going to pick up the Tao te Ching, the I Ching, or the Upanishads. I am likely to pick up a Plato dialogue, an Emerson essay, or an Ortega lecture instead. Much like if I want to do spiritual reading, I am not going to pick up Kant or Aristotle.