Karl Reichenbach: IMHO a must read for people interested in Dr's cosmogony

I just wanted to inform people interested in Dr's cosmogony, that the German Karl Reichenbach did some research with "sensitive people". These "Sensitives" as he called them are able to see in the dark emanations, which ordinary people cannot. And guess what? What they see does exactly match what Dr is describing in his works! But I cannot describe everything here, if you are interested you have to read his works.
Unfortunately only one of his earlier works was translated into the English. The originals are only available in German, especially his main work: "Der Sensitive Mensch".
Fortunately I can read German.
So you should at least read his translated work.
You can get it here on google books: Physico-physiological researches on ... - Google Books

Sensitive people see the emanations from a magnet. One side blueish/green (south pole) the other one red (north pole).
Now he describes what happens if you bring together two magnets with their opposite poles together (N on S):
(I will add drawings from Dr which exactly match the description) 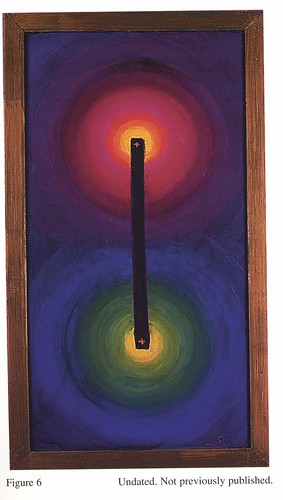 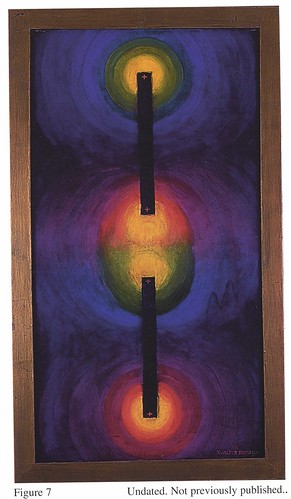 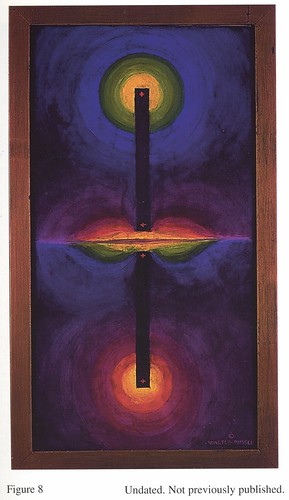 Quote:
This is just one short description. Others are much more detailed, but I don't have the time to write all this...
Shortly. First the flames lengthen and seem to attract each other.
Then, if they come even nearer they seem to repel each other and going into the width. Even so far as going behind the end of the magnets (as seen in Dr. pic). While approaching the light between the magnet starts to get more and more luminous. Just until the magnets really meet each other and the light and flames immediately disappear in the middle but therefore the light at the outer ends double, as now a magnet with double the length has been generated.

BTW: What he describes also matches the descriptions of Wilhelm Reich with the experiences he had in his orgon accumulator dark-room!
So IMHO people interested certainly would also find it interesting to read the late works of Wilhelm Reich.
Reich called this phenomena of "life energy" Orgon. Reichenbach called it Od. But from their descriptions it is obvious, that they meant the same.
BTW2: Reich even saw "waves" sometimes passing in his dark-room. He called them "Kreiselwelle" (my engl translation: Gyroscope wave), isn't that astonishing!!!
If you read about these people you really come to the conclusion all that there is in Dr's writing is really the direct truth. And not some abstractions.

PS: Why are the image tags disabled?

Reichenbach discovered, that even not so sensitive people can see these red and blue emanations, if the air is evacuated (vacuum).
E.g. many people who couldn't see the emanations from a magnet in the dark, could see it, if the magnet was placed under a desiccator which was evacuated. As long as it was evacuated, they could see these shining lights, but as soon as air was again let in it disappeared (surely only for the not so sensitives, as the higher sensitives could easily see it in normal pressure conditions).

BTW: Wilhelm Reich discovered the same. Namely that he could see these Orgone emanations especially good in vacuum tubes.

Rough translation from me:
[...]Sure, I responded. For this one has just to let a water drop fall with air resistance or without it, to get constructive or disintegrative energies, which are of meta-physical, which means not physically perceptible, character. Because, I continued explaining, constructive (levitative) energy guided in a vacuum tube gives a blue/green, and disintegrative (gravitative) energy, a bloodred strong pulsating light, which appears at the inner periphery.[...]

You see, all speak of exactly the same thing...

BTW: If some people are interested, I could share much more of such examples and discoveries, of all these people. Where you can really see, that they all had exactly the same cosmogony as Dr. Maybe just some puny differences in some details, but nothing that matters.
But I will certainly only do it, if people are interested...

For those who are further interested:
These are the people who IMHO surely knew what they did (as they all were able to develop devices on their cosmogony which showed that current physics is so on the wrong way) and they all had the same cosmogony -> Dr.'s cosmogony. They just focused their work on different aspects of the cosmogony:

I in no way mean, that these are the only ones, but these are the ones I more or less intensively studied over time.
I think the difference between these people and many others, which at some time made a machine which violated the current physics paradigma, is, that they knew what they did. They built their devices on this cosmogony and did not get it out of accidental trials...Therefore they also could replicate it again, which is exactly what many people who discovered some effects were not able to, for they didn't knew why their devices were working...

BTW: If some people are interested, I could share much more of such examples and discoveries, of all these people. Where you can really see, that they all had exactly the same cosmogony as Dr. Maybe just some puny differences in some details, but nothing that matters.
But I will certainly only do it, if people are interested...

Wish you all the best, peace and happiness for all of us.

And likewise to you as well.

Reply Tue 1 Dec, 2009 12:55 am
@info synthesis,
In continuation of this theme, I present the following ideas about magnets as well:

The physicist deflects electrons from their paths in vacuum tubes by holding a magnet near their path, and sincerely believes that the power of magnetism does that instead of electric polarity. He does not realize that the polarized condition in his "magnet" is an electrically divided equilibrium which has created two strong electric vortices, which his electrons are being pulled into just as particles floating in your bath tub are pulled into its spirally turning outflow*.

The work of Howard Johnson allows us to actually see these vortical flows that the Russell's spoke of and knew about through inner sensing. In his book, The Secret World of Magnets, he presents the data that he and his team collected when they took a computer and had it map out the area around a magnet in great detail. This is what they saw:

There are several important characteristics depicted here which have relevance to the Russell's work:
+The tightly compacted vortices are rotating clockwise, and the more tenuous vortices are rotating counter-clockwise.
+Each pole of the magnet is a mirror of the other.
+The vortices come in pairs, making 4 in total.
...These patterns show up again and again. :detective:

The seeming "attraction" and "repulsion" we usually attribute to a thing we call "magnetism" only shows up with the motion of electricity. (Think of how electromagnets function.) I believe this is absolutely imperative to understand to fully comprehend what is being referred to, not only in the above quoted paragraph, but in nearly all of the Russell's work.

Thank you for reading.

I believe this is meant both literally and figuratively.

In a figurative sense, I present a silly (but no less important) example for your enjoyment: Men and women seem to be "opposites". But that opposition is only seeming, for as we know, it takes both a man and a woman to create human life. Indeed, they are not opposites, but perfect complements! This is just one example of how complementary they are.

So when are men and women opposites? When what they do as individuals is in opposition...an angry man and a happy woman certainly don't get along, and vice versa.

It is interesting to note, that opposition is expressed in the action of things...what they do, rather than what they might seem to be. "Like attracts like." The circumstances we manifest are a reflection of the choices we have made.

For some examples of the literal sense, I quote the following:

An electron will attract another electron when their closest sides are going on parallel paths in the same direction relative to the surroundings if they are locked some way as in orbital shells. Sometimes they will even be locked in an unbalanced spin position such as the d and f shells in iron that cause magnetism.

Magnetism is caused by these d and f shells in iron having more electrons spinning one way than they do any other way. Electron spins are generally balanced elsewhere.

Scientists agree that the smallest entity in magnetism is the spinning electron. Scientists also agree that we will get such a magnetic spin binding attraction whenever the spins, of the electrons, are in the same equatorial plane or parallel axial spin planes (on the same spin axis) with the closest sides, between this pair, going in the same direction (like gears meshing and not clashing). This, in fact, is Ampere's Law.

In other words, two electrons will attract magnetically when they are spinning in the same equatorial plane or parallel axial planes (on the same spin axis) and their closest sides are moving in the same direction (like gears meshing and not clashing). This is also the way sigma and pi chemical bonding works.

Taken from Universities Asleep At The Switch by Daniel P. Fitzpatrick Jr.
(If you would like, you can read it here: Universities asleep at the switch)

The gear analogy given is actually quite elegant, and probably explains where the confusion arose. I made some images to explain:

In this image, the two gears seem to be going in opposite directions. From our point of view, the one on the left is turning clockwise and the one on the right, counter-clockwise. However, if you notice the teeth of the gears, they blend perfectly. The gears can function because they are mirrors of one another.

In this image, the two gears seem to be going in the same direction. From our point of view, they are both turning counter-clockwise. But, they don't move anywhere because the teeth are grinding against each other. They literally oppose.

The same can be understood with magnets. Keeping in Mind what I wrote in my previous post, if you were to "see" the electricity running through a magnet it would generally look like as if it were going in one way and out the other. If you were to take two magnets, and align them so that they push each other apart, you would know that they do this because the electricity running through them is pushing them away from each other.

Now, if you take them and make them face each other in a way where they come together, you would know that the electricity flowing through them pushes them together from the outside. (This is important, as it applies to more than just magnets and explains why any "attraction" is only seeming.)

Thank you for reading. Hopefully this may be of constructive use to you all.